In 1921, Alexander Luttrell gave the Dunster Memorial Hall to the people of the village for meetings, activities, parties and events in remembrance of those from the village who served and those who lost their lives in the First World War. It became a prime meeting place for villagers and has served the community well for many years.

The Memorial Hall Committee was approached by the relatives of the late Mrs Mollie Hardwick in 1970 with the proposal to exhibit at the Hall her “family” of dolls which she had collected since 1957 in her Dunster cottage.  Failing health had prevented her from getting about or travelling abroad, so the world and its dolls came to her as relatives and friends collected them on their travels. The Committee accepted this proposal and this was the beginning of the village museum she had wanted to create. 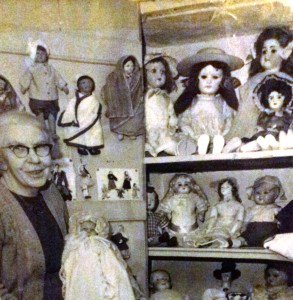 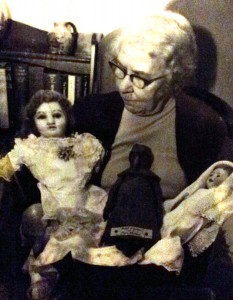 Mollie Hardwick with her “family” of Dolls (Left and Right)

The Dolls Collection opened in 1971, and since then many more dolls have been donated to the collection. There are now many old and interesting dolls, from different periods and often in their original clothes. Old dolls can be compared with those from the second half of the 20th century to provide a fascinating contrast. There are Artists’ and Fashion Dolls, a unique collection of 20 “Sasha” Dolls in 1913 period dress and the Bristol Red Cross Dolls.

A prominent feature of the collection is the wide range of dolls illustrating the costumes of many lands and cultures. Dolls that will remind visitors of their childhood and familiar nursery rhyme characters. Novelties, such as tea cosy and dressing table dolls, advertising figures and dolls made from many unusual materials can be seen.

The building, and in particular the hall itself, continued to be widely used in a variety of ways until the completion of the Dunster Tithe Barn Project in January 2007. This was a five year restoration project which turned the run-down Tithe Barn into a magnificent centre for community events and functions. This wonderful new large space became popular for village events and as a result the Memorial Hall began to be used less.

By 2012, it was decided that the Memorial Hall needed to find a new purpose, that something should change to increase its usage. Many different suggestions were put forward, but it was decided that the Memorial Hall should become a 21st Century Museum and Community Centre specifically dedicated to the village and people of Dunster. As a result, the Dunster Museum and Doll Collection Project was born. Have a look at our Project page to find out more.